This article originally appeared in the September 2019 issue of Oilfield Technology. Reprinted by Permission.

An effective plug and perf process requires a multitude of moving parts to stimulate a well that produces at its highest capacity. The majority of today’s plugs are manufactured using a composite fibreglass material. Some are made of a magnesium alloy or an advanced thermoplastic material that dissolves after use, but these are not widely popular.

Setting the plugs involves the use of an electric wire-line cable, which lowers a setting tool, perforating guns, and each plug down into the well. Gravity helps in the vertical section, and then fluid is pumped behind the plug to push it horizontally along the steel pipe inside the wellbore.

When the plug is placed where it is needed, an electric pulse is sent down to actuate the setting tool and set the plug. At this point, the plug expands and a rubber seal is pressed against the full diameter of the inside of the pipe casing, effectively closing off a section of the pipe. In order to help hold the plug in place, little inserts on the outside of the plug, commonly known as ‘buttons’, are also pressed into the pipe interior and essentially bite into the steel, fixing the plug in place (Figure 1). After the plug is set, another signal is sent down to the perforating guns above the plug. The guns use small explosive charges to pierce the pipe casing and cement, and create holes in the rock. Fluid carrying proppant, normally fine sand and potentially other chemicals and friction reducers, is then pumped down under pressure to enter these perforations and create small fractures in the rock.

Once one stage of the pipe is perforated and fracced, another setting tool is used further up the pipe, another plug is set, and the perforation and fraccing process is repeated. This continues until the entire wellbore has been fracced.

At this point, the plugs need to be removed in what is commonly called a ‘mill out process’. A drilling tool is generally sent down on coil tubing to mill out (cut up and break apart) all of the plugs. At the same time as the plugs are being milled out of the casing, fluid is being pumped down the inside of the tubing and back up the outside to flush out the plug’s various pieces. It is vital that all of the plug components are removed to avoid clogging the well, damaging production equipment, or contaminating the produced fluids.

The effectiveness of a plug and perf operation depends on each plug holding in place during the pressure pumping process. If any buttons crack and break, it jeopardises the holding integrity of the entire plug. If the plug fails and is not able to hold the seal, it can slide downhole and put at risk the stimulation of that stage of the well. Thus, this would result in that stage of the well being unable to produce to its highest capacity. At the same time, it is also important to be able to remove all of the buttons from the pipe during mill out. These little buttons play a vital role in the success of the well, and it is important to ensure that the ideal button material is used so the plugs can perform to their highest capacity.

The inserts on those older plugs were also full-circumference rings, not the little buttons in use today, so the quantity of the heavy cast iron was problematic as well. In the search for smaller inserts, companies began exploring materials such as tool steel and tungsten carbide. Like cast iron, tool steel and tungsten carbide are hard, strong and heavy. While they provide advantages over cast iron because of their smaller size, a mill out using either of these can still be challenging.

Tungsten carbide brings particular challenges. The material is so heavy that it does not flush out, it simply stays on the low side of the horizontal wellbore. In addition, a tungsten carbide cutter is often used during a mill out, so the process is not only inefficient but detrimental as the milling tools become damaged. Tungsten carbide also has a tendency to chip, which affects the button’s biting capability. A more viable solution was clearly needed.

Ready to talk about frac plugs?

Our experts will be glad to discuss your operations and how technical ceramic frac plugs may improve your operational performance and efficiency. To get started, please provide a little information about yourself below or call +1.303.271.7100.

All ceramics are not created equal
Most people are not aware of the far-reaching capabilities that today’s engineered ceramic materials can provide. In fact, a recent report projects that the advanced ceramics market will reach nearly US$134 billion by 2025.1

Many different types of technical ceramics serve as vital components for industries ranging from aerospace and automotive to electronics and biomedical. Properties such as extreme hardness and temperature resistance enable ceramics to find use in applications such as radomes for missile systems, orthopedic joint and spine implants, and nearly every electronic device used on a daily basis. Due to their hardness, corrosion resistance and other useful properties, technical ceramics also find a wide range of purposes in the upstream oil and gas industry, such as for mudpulse components in directional drilling tools, dome-shaped rupture disks, electric submersible pump components, and valves and valve components, to name just a few.

Table 1. The benefits and challenges associated with each of the button materials discussed as they relate to the plug and perf application

Trade-offs:
P-110 casing may be upper casing strength limit depending on tool design

Trade-offs:
Can severely damage if exceeding stress level due to lower crack-arresting properties

Trade-offs:
Very difficult to mill up and clean out from wellbore, can chip edges and affect bite capability

Alumina and zirconia are widely considered the workhorses of engineered ceramics for many applications, including the ceramic buttons used in plug and perf operations. Though they are both technical ceramics, they are not identical or interchangeable. It is important to understand how these materials differ in terms of properties and processing, so as to identify the ideal ceramic for each specific plug.

Alumina is the most commonly used advanced ceramic material in the world. It is hard and light, making it a viable option to replace metals in myriad applications. These properties also make alumina somewhat effective for plug and perf operations, depending on the pressure. Its light weight and low toughness make alumina easier to mill out than cast iron, tool steel, and tungsten carbide, but it is weak and has no crack-arresting properties.

Most plugs are designed for pressures of approximately 10,000 psi, which is too much for alumina to handle. Some companies use alumina for light performance, low pressure applications (typically 5,000 psi or similar), or they might use alumina for the upper slip buttons since the loads are lower. However, most have moved away from alumina because the price difference between the alumina and zirconia buttons is quite small in relation to zirconia’s added benefits.

Crack propagation
Crack propagation is minimised when an applied stress is magnified by a stress concentration at the crack tip and causes a phase change (tetragonal to monoclinic) in the material. TTZ’s monoclinic phase is more voluminous, so it puts the crack into compression, retarding its growth (Figure 2). Therefore, if the strength limit is exceeded and the TTZ button’s edge is damaged at some point, the crack will stop before the edge is completely crushed. This helps ensure that each plug is able to maintain its integrity, setting the stage for optimal well stimulation and output. TTZ is also less expensive than YSZ, due to the raw material costs and additional processing associated with YSZ.

Figure 2. A button edge embedded in a pipe casing inner diameter (ID). During the plug setting action, the button edge is skidded against the casing, which can create small cracks. The material at the crack tip in a magnesia zirconia (TTZ)-based button converts to a monoclinic phase. Its ability to function even when cracked is a key feature of magnesia partially stabilised zirconi, and derives from the material’s ability to minimise crack propagation.

During the development process for its Dura-Z™ magnesia partially stabilised zirconia, CoorsTek engineers focused on optimising properties such as toughness, hardness, and strength for buttons. This involved performing crush tests, among others, to evaluate the material’s cracking and breakage. Following the evaluation of those tests, material processing was adjusted and a specific heat treatment profile was developed for the production of these buttons in order to create the highest strength and fracture toughness possible for TTZ.

When operating at higher pressures, where the strength of zirconia is needed, companies can adjust the design of the plug in order to benefit from the crack-arresting property of TTZ. For example, adding additional buttons to the plug in order to distribute the load more broadly can provide a solution. 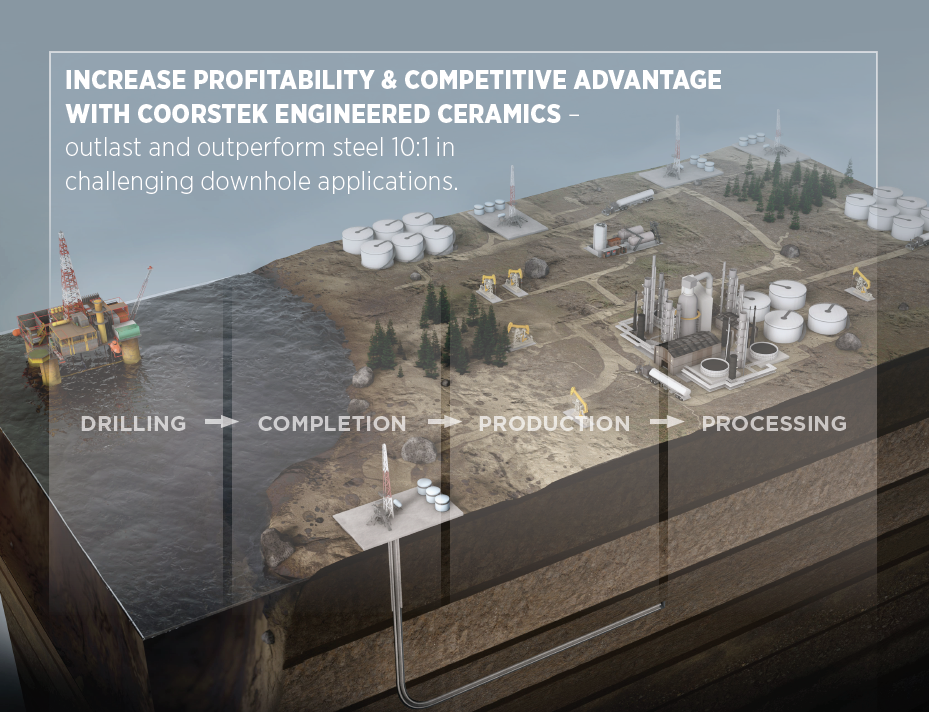 When compared to alumina, zirconia is a more specialised engineered ceramic material. Like alumina, it is quite hard and light, but it offers the additional advantage of superior strength and toughness. In order to achieve and maintain this strength, it is necessary to stabilise zirconia in its tetragonal phase. This is typically done by introducing a stabilising dopant. In the case of plug buttons, yttria and magnesia are used to stabilise the zirconia.

Yttria-stabilised zirconia (YSZ) is much stronger than alumina while retaining the hardness and lightweight properties that are key in this application. Since it has superior strength, YSZ can be used at the higher loads that alumina is not able to maintain. However, an unfortunate issue with YSZ is its crack-propagation property, wherein cracks in YSZ almost always lead to total failure.

When a YSZ button’s strength is exceeded during the setting, perforation, or fraccing processes and a crack begins at the edge of the button, the crack will most likely zipper through the material and the button will be crushed. As discussed, it is best to ensure the plugs’ integrity whenever possible in order to achieve optimum well fraccing.

Magnesia partially stabilised zirconia, also known as transformation-toughened zirconia, or TTZ, while still light, hard and stronger than alumina, is not as strong as YSZ. The key with TTZ is that its superior crack-arresting properties enable it to arrest or stop cracks before the button is destroyed.

Finding the ideal button
As summarised in Table 1, TTZ features a combination of properties that make it suitable for these operations. For example, its light weight makes it easy to mill out and strong enough to maintain integrity in the harsh conditions and pressures that are typically present. Additionally, its ability to arrest cracks means that it can avoid the catastrophic damage that other ceramic materials are susceptible to.2

Depending on the manufacturer, each plug used in the plug and perf process incorporates approximately 30 – 60 buttons. Spears & Associates recently estimated that more than 700,000 plugs were set in the US alone in 2017.3  Imagine how productive these wells could be if none of those plugs failed. This is not a pipe dream. Better well stimulation and higher output are possible through the use of ceramic buttons made with TTZ.