Note: This article originally appeared in the July/August 2020 issue of Oilfield Technology magazine. Reprinted by Permission.

Electrical submersible pumps (ESPs) are an efficient, cost-effective method of providing artificial lift in the oil industry. ESP systems have continuously improved since 1927, when the first pump made in Bartlesville, Oklahoma, US, was installed in an oil well near Russell, Kansas, US. Today’s ESP systems create a small environmental footprint because of their optimised power utilisation, minimal production stoppages, and high reliability. These qualities reduce unplanned activity at the wellsite and minimise the need for repairs, as well as maintenance waste streams.

An ESP system comprises several major components (Figure 1). The pump is a multistage centrifugal type wherein most surfaces are directly exposed to production fluids. The focus of this article is primarily on the pump’s radial bearings and, to a lesser degree, the mechanical seal in the seal chamber section and other bearings in the components.

Most oil wells require artificial lift at some point to enhance production. As an oil well matures, it is not unusual for it to produce increasing amounts of water, abrasive solids, and gas. Shale oil wells produce these materials as well, sometimes immediately. ESP systems are ideal for lifting large volumes, but abrasive solids and gas pose major challenges for these types of pumps.

Abrasive solids in the pump or intake may introduce a three-body wear process. This type of wear is frequently referred to as abrasion and is defined as the removal of material by particles sliding, rolling, or crushing between two surfaces, as illustrated in Figure 2, or by particles embedded in one surface sliding against a second surface.1 This type of wear most frequently affects the pump’s radial bearings, impeller-diffuser seal areas, and thrust Bearings.2

When a pump’s radial bearings wear, the resulting increased clearance between the sliding bearing surfaces causes increasing shaft instability (whipping), which can compromise the mechanical seal in the seal chamber section and allow wellbore fluids into the motor to cause an electrical failure. This shaft instability also stresses the motor bearings.

Recognising the importance of bearing systems for long run-life and reliability, the ESP industry has responded with design and material improvements. In particular, manufacturers have implemented different bearing approaches; the biggest step-change has been the incorporation of technical ceramics and cermet (ceramic/ metal composite) materials such as tungsten carbide.

An ESP’s radial bearing system consists of a sleeve that is keyed to a rotating shaft that is positioned inside a bushing held in a housing or diffuser bore. Two main styles of bushings are generally used. The compliant style typically incorporates O-rings between the outside diameter of the bushing and the housing or diffuser bore, and they have some means to retain them in the bore. The O-rings serve to minimize rotation, vibrations, and stresses, as well as compensate for thermal expansion and allow proper alignment.3 Figure 3 illustrates this concept.

Another style of bushing design uses an interference fit between the bushing and the housing or diffuser bore. The interference can be created by pressing the parts together or heating the housing or diffuser so the bore expands, enabling the cooler bushing to be placed in the diffuser. However, this design has a limitation in that the bushing can migrate out of the diffuser.4 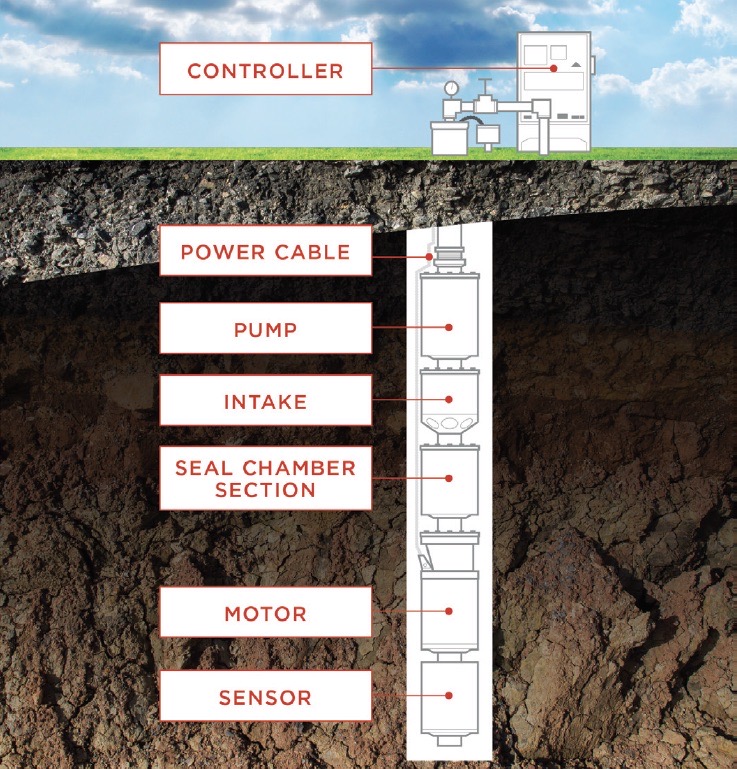 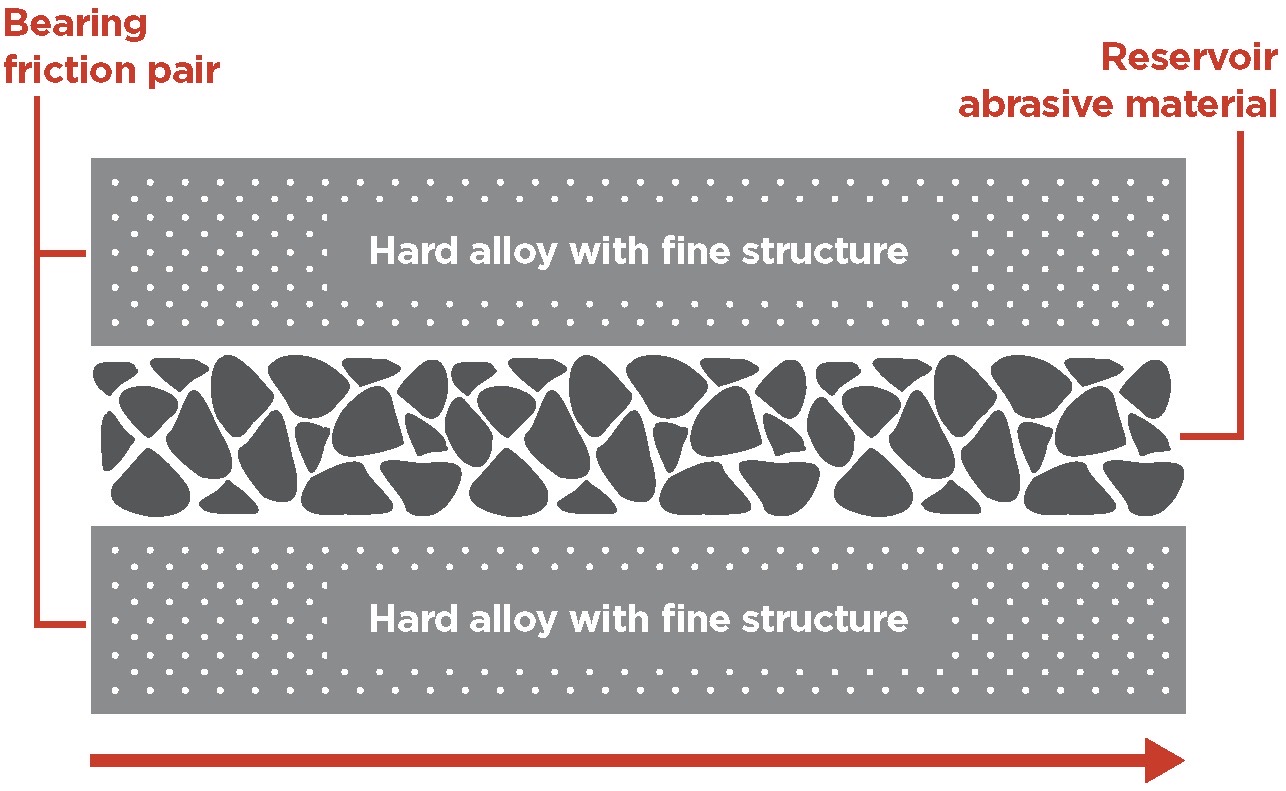 The pump’s shaft sleeves are keyed to the rotating shaft and spin inside the bushing. There are two styles of keyed sleeves. The first style is a simple cylinder with an inner diameter keyway, while the other has a flanged end that imparts the axial forces from the impeller to the thrust bearing in the seal chamber section. Figure 4 illustrates both designs.

Standard ESP pumps use two radial bearings: one in the head and one in the base. For wells that produce abrasive solids that lead to bearing wear and shaft instability, manufacturers started increasing the number of radial bearings to reduce the unsupported shaft span. This design advancement has shown that increasing shaft stability extends the mechanical reliability. As a result, some manufacturers place a radial bearing in every stage for increased run-life.3 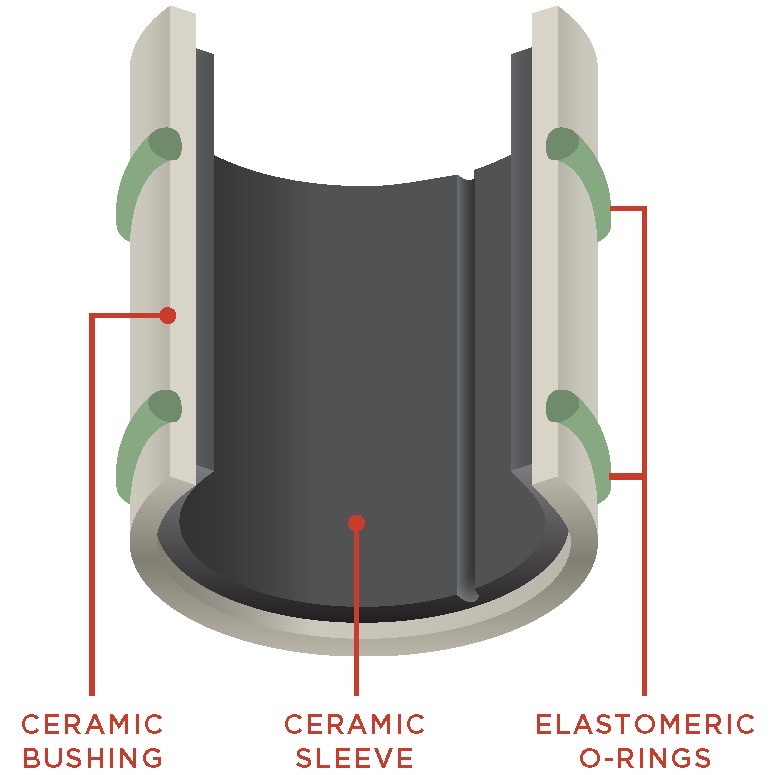 Friedrich Mohs developed a scale that shows hardness of minerals and it is shown in Figure 5 compared against a vertical scale for Knoop hardness. Figure 5 shows that bearing materials are harder than produced oil well solids, as well as the metal components used in ESP systems. In most cases, softer materials do not wear harder materials. However, ESP radial bearings are an exception because solids are present and cause a complex grinding abrasion. Several factors determine the rate of material removal: hardness of the bearing and particle material, ductility of the surface, and the size, shape, and toughness of the particle.1

Silica sand (quartz) is commonly used as a proppant to increase conductivity. Though its hardness varies, it is likely the hardest material found in production fluids. Its varying hardness is shown in Figure 5 on the high side of its hardness range. 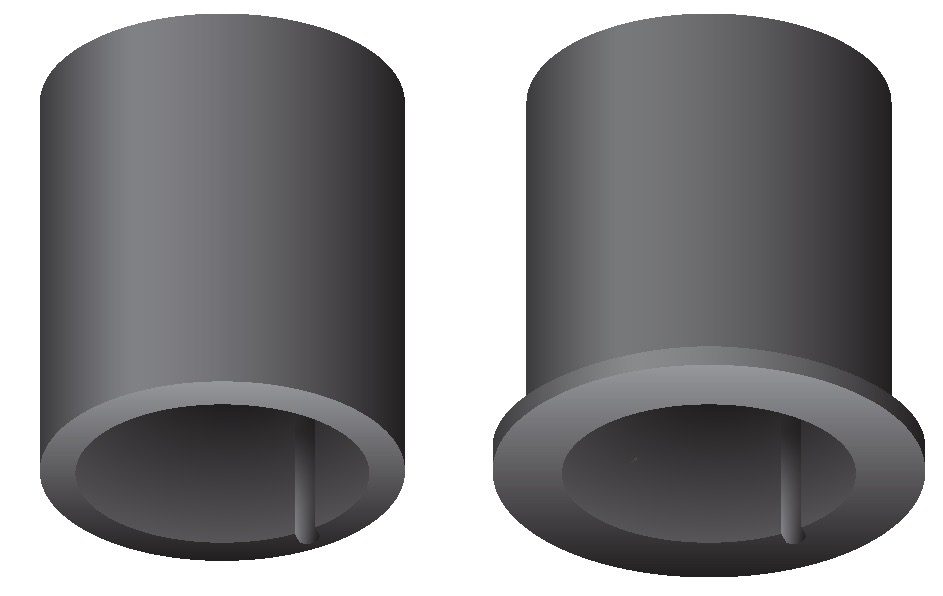 The hardness measurement tests noted in Table 1 are different, but the values are comparable. As can be seen, the hardness of common bearing materials is much greater than steel: silicon carbide is the hardest, followed by tungsten carbide and then zirconia.

The low fracture toughness of technical ceramics and cermets introduces special design considerations. The two bushing designs mentioned previously somewhat compensate for low fracture toughness. In the compliant design, the component is held with shock-dampening O-ring(s), while the interference fit design puts the part in compression and thereby increases its resistance to cracking.

For some components, such as shaft sleeves and motor rotor bearings, compensatory design changes are not possible. In these cases, it is necessary to avoid sudden and large impacts of the components and assemblies. One manufacturer developed special shipping boxes with added rigidity and foam cradles, as well as shock tags and digital shock loggers, to minimise and monitor shock loads.6

Zirconia is almost two times tougher than tungsten carbide and nearly three times tougher than silicon carbide. As a result, it is much more resistant to shock or impact, which is desirable in an oil tool application. Therefore, when the hardness of zirconia is adequate for abrasion wear, it has a reduced risk of damage resulting from handling.

During ESP tool tear-down, indications of high temperatures are frequently observed in the bluing of the steel diffusers. Some diffusers’ bluing suggests temperatures approaching 315°C.4 Since the technical ceramics used in ESP bearing systems have much higher maximum use temperatures, this is not an application limitation. 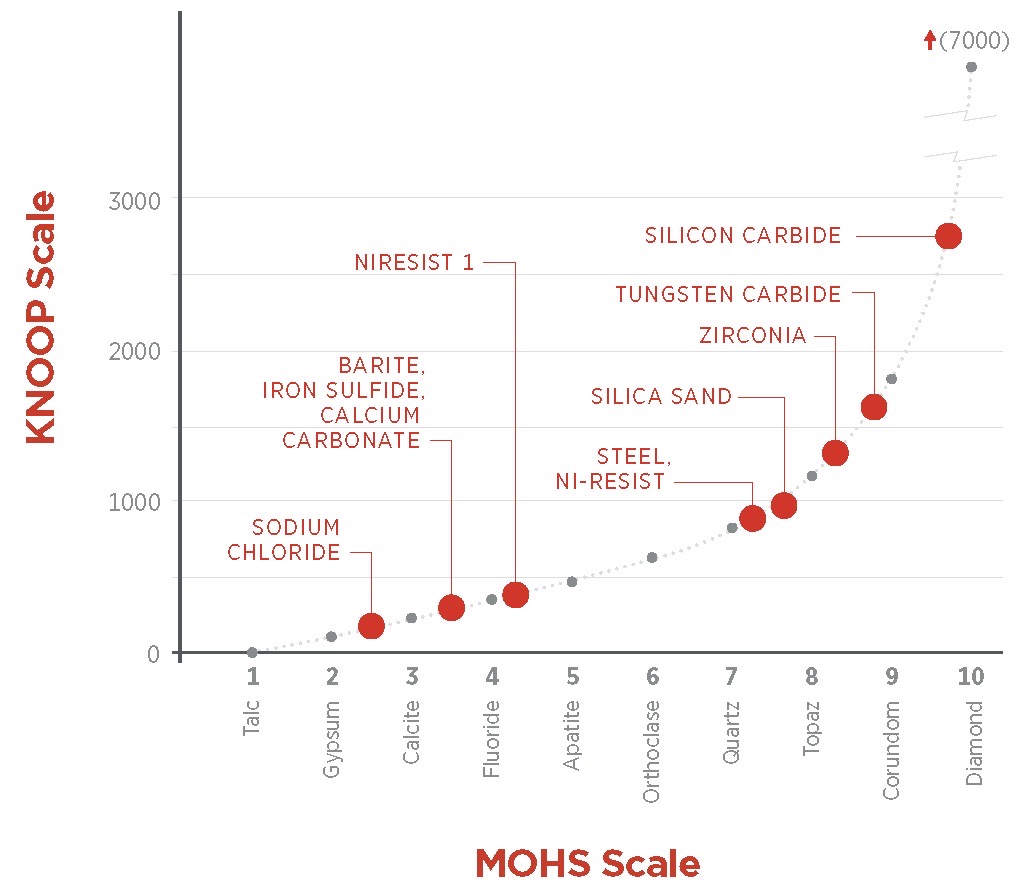 Thermal shock resistance is also high for the technical ceramics, which maintain their strength with rapid temperature changes of 300°C and higher. For the values shown in Table 1, the test was run by quenching samples into water from various elevated temperatures. The change in temperature, where a sharp decrease in flexural strength is observed, is listed as the Delta Tc, or temperature change.

Zirconia has a coefficient of thermal expansion close to steel, so if the shaft outer diameter or bushing bore size changes with temperature, the zirconia sleeve and bushing will substantially change with it. However, tungsten carbide and silicon carbide have lower coefficients of thermal expansion. With these materials, the sleeve may crack if the shaft size increases with temperature, or the bushing may become loose from the bushing bore and migrate out, as mentioned previously. Therefore, when other properties are adequate, zirconia reduces application concerns caused by coefficient of thermal expansion mismatches. 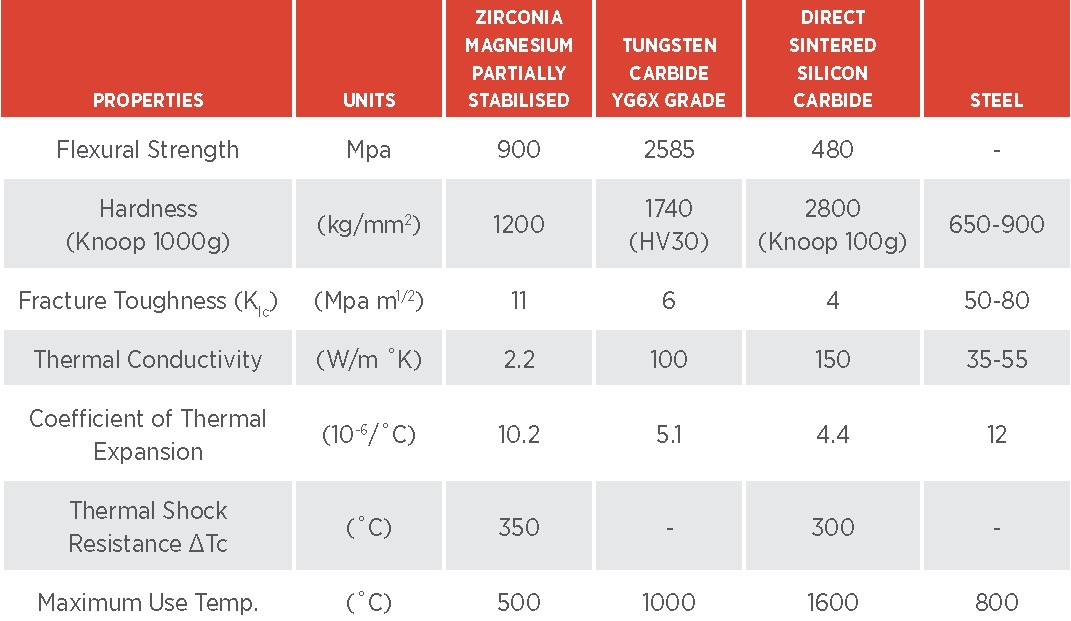 It is not certain which is the more desirable property: thermally conductive or insulating. In normal pump operations it is unlikely to make a significant impact on performance, though zirconia may be preferred to insulate the heat generated at the sliding bearing surfaces from the metal components. However, in cases of gas slugging, it may be desirable to quickly remove heat generated at the unlubricated sliding bearing surfaces. In these cases, a carbide may be preferred.

Technical ceramics are inorganic non-metallic solids with high levels of chemical stability. As a result, they are extremely resistant to chemical corrosion. For the chemicals typically injected or produced in an oil well, zirconia and silicon carbide are chemically inert. However, the cermet tungsten carbides are susceptible to corrosion because the binder material can be leached out; a cobalt binder is more susceptible to corrosion than a nickel binder, especially with acids. 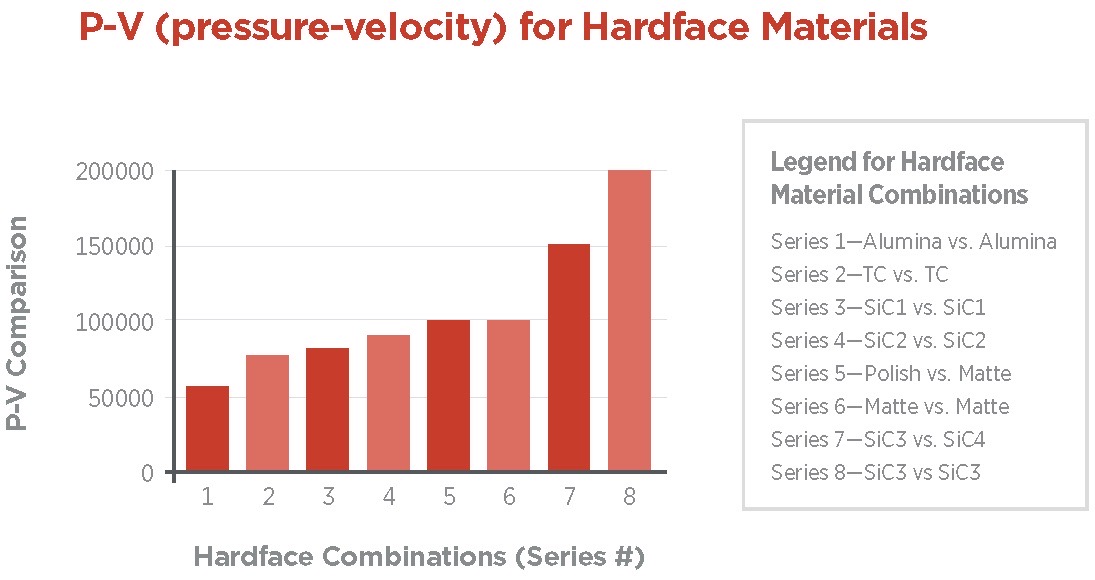 Technical ceramics and cermets also provide beneficial properties for additional components in ESPs, including the radial bearings in the intake, the mechanical face seals and thrust bearings in the seal chamber section, and the motor thrust bearings and rotor bearings. Several materials are used in these applications, but the most common are silicon carbide and tungsten carbide due to their wear resistance.

Other factors aside, an ESP system will eventually fail from vibration caused by radial instability brought about by abrasive wear.2 Some oil producers want ESP systems with a 10-year run life7 that are ultra-reliable.8 However, not all oil producers need an ESP system with such a long life – or are willing to pay for it. For example, an ESP system for a Permian unconventional well, where it may be replaced in 15 months with a different lift system, should have an optimal bearing design, material selection, and configuration. In contrast, the optimal bearing system for a North Sea well needing a six-year run life will likely be different.

Selecting the right bearing system can reduce the total cost of operations and simultaneously reduce the environmental impact by minimising power needs, preventing unplanned maintenance/repairs, and decreasing their associated waste streams. In addition, new materials are under development with potentially better abrasion resistance than current materials, so one should not accept the status quo – especially since ESP bearing systems play an important role in enabling safe, clean, and affordable energy.

Note: The figures are generalised information and for illustrative purposes only. The charts are intended to illustrate typical properties. Property values vary with method of manufacture, size, shape of part, and test method. Data contained herein is not to be construed as absolute and does not constitute a representation or warranty for which CoorsTek assumes legal responsibility.